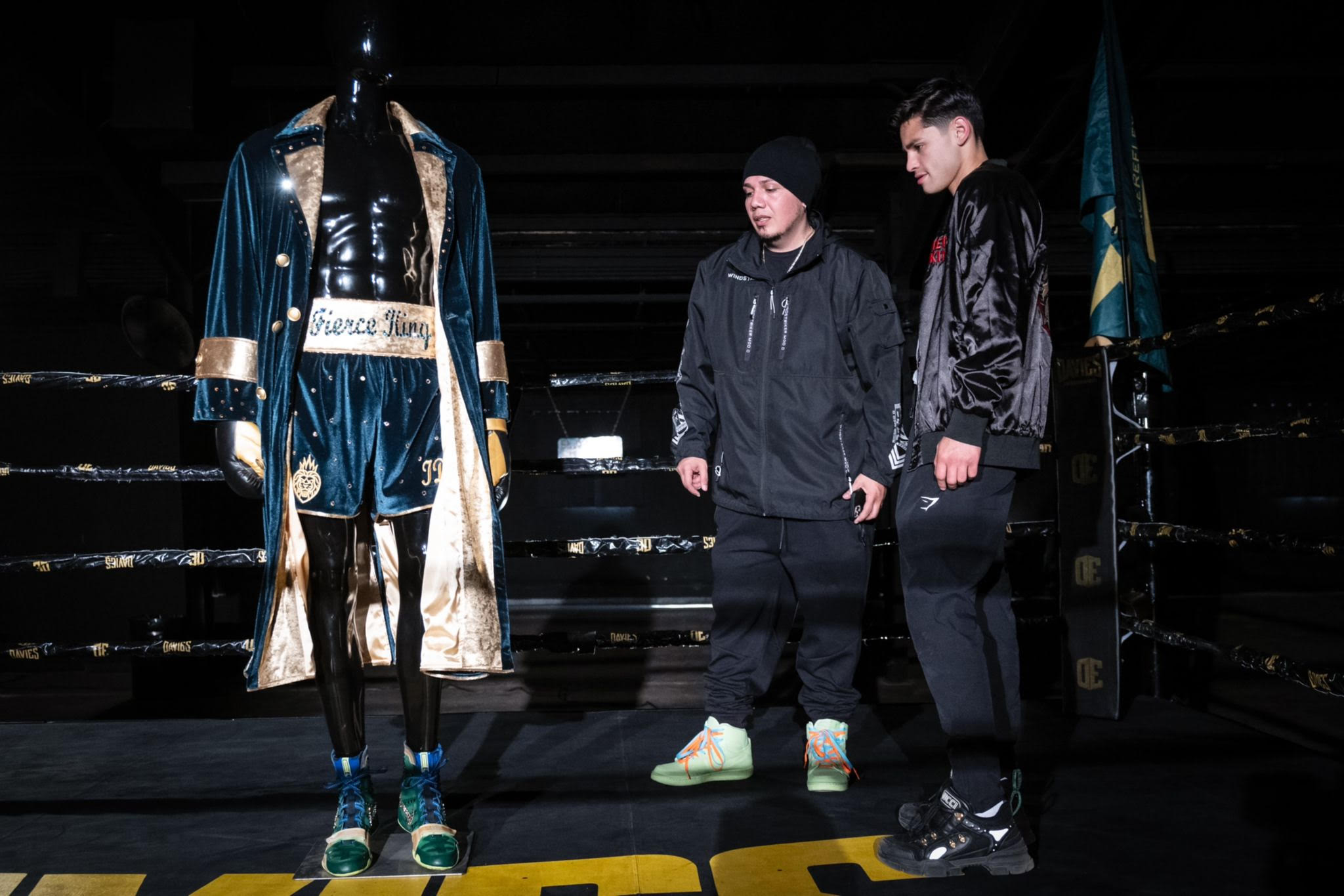 Ryan Garcia comes back to the ring in style with the help of Javier Zinzun Jr. of IGMOB

By IGMOB ADMINApril 9, 2022No Comments 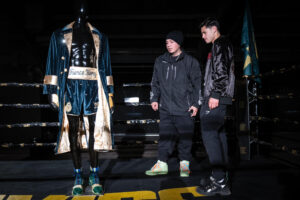 You must have read the news and saw all the headlines in the world of boxing, The King is back!  Ryan Garcia is making his long awaited comeback into the ring April 9th, 2022 against undefeated Ghanaian boxer Emmanuel Tagoe in a light heavyweight fight at the Alamodome in San Antonio on DAZN.   With an impressive record (31-1, 15 KO’s) Tagoe is no tune up fight for the young king.   Garcia (21-0, 18 KOs) was slated to fight Javier Fortuna in July 2021, but withdrew from the fight to address his mental health. Fans  were disappointed to learn about the news and are eager to see the King back in action.  Some of the most hard fought battles of a boxer’s career happen early on outside of the boxing ring.  The struggle of becoming a professional boxer is a journey only a few are capable of handling.

Mohammed Ali once said “Only a man who knows what it is like to be defeated can reach down to the bottom of his soul and come up with the extra ounce of power it takes to win when the match is even.”   We as fans sometimes forget or overlook the real struggle a young fighter goes through on his way to becoming a World Champion. In a sport where one bad round, one lucky shot or even a knockdown can shift the tides of a young prospects career all in a matter of seconds.   We overlook the 5 AM morning 8 mile jogs, the strict diets and gruesome training a professional boxer endures during training camp just to please his fans for those 12 rounds. In the case of Ryan Garcia who has an 86% knockout ratio and has stopped the last 18 of his 21 opponents you can see him for a mere average of 3.2 rounds, if that.

In a sport that is known for its betrayals some of the greatest stories in boxing are left outside the bright lights of the ring, but one thing is for certain that loyalty will always win.    Having a friend by your side along the way can make the difference in this road to becoming a world champion.   Javier Zinzun Jr. of IGMOB was always a fan of the sport.  Long before becoming the world’s number one boxing designer, Javier had aspirations to make a name for himself on the runway’s of the championship fights.

At the same time a young prospect from Victorville, California was making his own noise in boxing winning 15 national amateur championships with an amazing 215-15 record.   Javier Zinzun Jr. Recalls the first time he talked to Ryan and his parents.  It was a late night just a week before Ryan Garcia’s  pro debut, the chat box in facebook messenger lit up,  Javier Zinzun Jr. was in his bed thinking about his next move in the world of fashion.   At this point in time in the career of Javier Zinzun Jr, had not yet designed a professional boxing outfit and was making a living working two security jobs at minimum wage and designing t-shirts for up and coming pro boxers.    Mrs Lisa Garcia (Ryan’s Mom) needed someone who could turn around some t-shirts quickly and cheaply. They were on a budget.  Ryan’s first professional fight was scheduled in Tijuana, Mexico.   Like most young prospects, fighters turn to Mexico to establish a rapport in the sport at an early age.  Javier Zinzun Jr. saw the potential in Ryan and knew his future was a bright one.  Inspired by what he saw in Ryan, he made the shirts at no cost.  He saw something special in this kid known at the time as “The Flash”. What turned into an evening of cheers and joy as Ryan Knocked out his first opponent to get his 1-0 professional record on BoxRec.com little did anyone know that two champions were in the making and a beautiful friendship and bond was about to begin with his family.

Ryan Garcia and Javier Zinzun Jr. have since both made noise in the boxing world, Ryan as a professional boxer and Javier Zinzun Jr as the World’s Number one boxing designer to the sport’s largest stars.   IGMOB never refers to his customers as clients, they are all family.

Ryan would go on to fight 20 more times amassing a 21-0 record styled in IGMOB one of one custom made outfits.  The hard work and dedication has also paid off for Javier Zinzun Jr. as he has  amassed a fan base of his own in the world of boxing, known for creating some of the most jaw dropping designs the world has seen in the sport.  IGMOB has styled up the likes of:   Canelo Alvarez, Jaime Mungia, David Benevidez, Manny Pacquiao and recently expanded his portfolio of family members into the craze of social media fighters like Logan Paul, Austin Mcbroom, Faze Jarvis just to name a few.

The loyalty of Ryan Garcia has allowed entrepreneurs and dreamers like Javier Zinzun Jr. to take the main stage in the world of fashion on these mega PPV fights.  When asked Javier Zinzun Jr. how it feels to be working with world champions and future hall of famers he responded.   “It’s an honor to be working with my family.  I never refer to my customers as clients.  I feel like I am in the ring with them fighting with every jab and hook they throw.  I put my heart and soul into this, I sometimes stay up late at night just adding the final touches to my outfits because I want my family to look the best in the ring.  I wouldn’t give anything to them that I wouldn’t wear. Ryan has always been loyal since day one. Lisa, Henry and Sean are all my family.”

For his return to boxing earlier this week Ryan received a special tracksuit designed by Princess Diana’s former designer sponsored by GymShark.   Javier Zinzun Jr. topped the icing on the cake with a spectacular design of his own.  IGMOB was commissioned by Ryan to create a  custom boxing robe and trunks outfitted with the signature IGMOB belt line, Swarovski Crystals, proprietary stretch green velvet and hand stitched embroidery of the “King Ry” Logo.  The details of the outfit are next level for the sport.  The outfit also had a pair of custom Nike Hyper KO’s boxing shoes bedazzled in IGMOB style hand painted by BSPK to match his amazing outfit.   Javier Zinzun Jr. has been known to have the most comfortable outfits in the industry that not only look great in the ring but increase the boxer’s performance and confidence.  When revealing the outfit at the Davie’s Entertainment Center in San Antonio, Texas owned by serial entrepreneur Cameron Davies, Ryan Garcia reacted and commented “Wow this is amazing! If you don’t know, JR is the man. He is the one to go to on anything you need designed, he has love for me and this is the most beautiful outfit I have ever seen in my life, I can’t wait to star in it, Lets Go!!”

Javier Zinzun Jr. has recently been promoted to WBC Cares Ambassador.  He is the only fashion designer to be featured inside Ring Magazine and is the runner up for this year’s first ever World’s Boxing Council Designer of the Year award which will highlight the world’s number one boxing designer.   Javier  spends his free time speaking at local schools to the youth and workshops.  He shares  his story on how he came up in the fashion world and battled his drug addiction to become the World’s Number One Boxing Designer.   If you are in need of help or someone to talk to reach out to Javier via instagram @igotmyownback_fighter

Mental health is no joke, reach out to your friends and family from time to time and show love to the people who love you.

Support Ryan Garcia’s comeback live on DAZN April 9th and while you are watching pay close attention to the details of the outfit.  Let your friends know that you know the designer the world knows today as IGMOB.